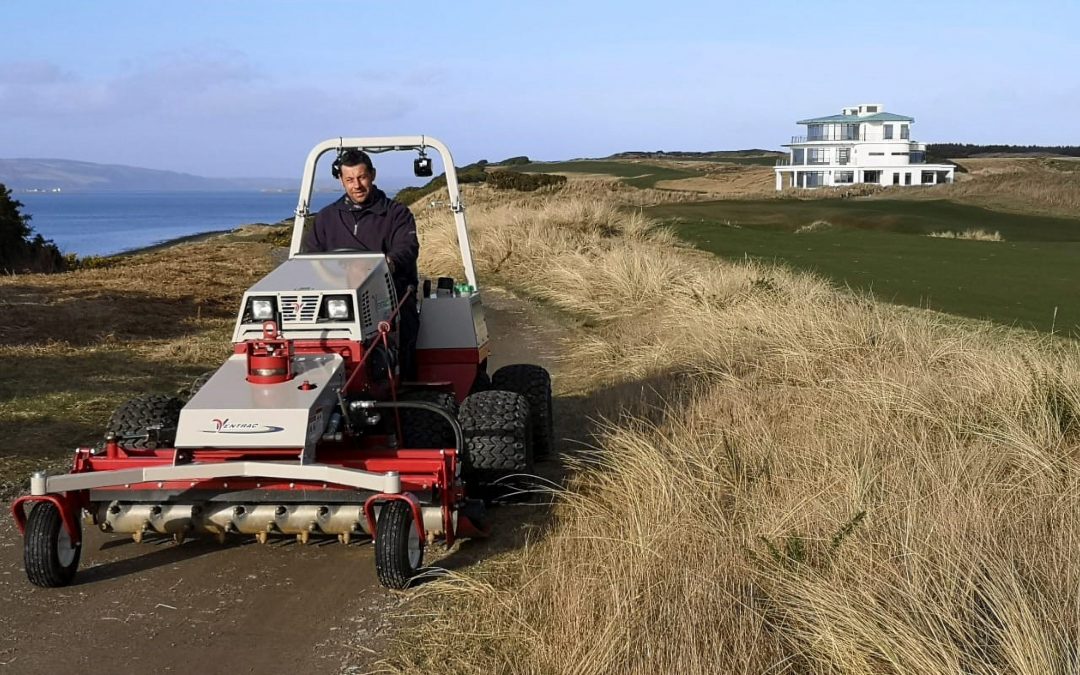 Castle Stuart Golf Links, situated close to Inverness and overlooking the Moray Firth, is the latest Scottish golfing venue to purchase a Ventrac 4500 all-terrain compact tractor and a selection of attachments. Delivered by local dealer, Double A Trading Company Ltd, the package includes the 25 hp all-terrain compact tractor unit in its 8-wheel configuration, a Contour deck, a Tough Cut deck and Power Rake.

James Hutchison has been Head Greenkeeper since 2017, when he was promoted to the post from his previous position as deputy. He has been with the club for 14 years, since the beginning of the course build in 2007, so the course is in his DNA.

Commenting on the purchase of the Ventrac and attachments he said,

“This an excellent and versatile addition to our machinery fleet. Initially we’ve purchased three attachments, but I’m sure that over time we’ll be adding to this.

“The Tough Cut deck certainly lives up to its name. We’re using it extensively to take out the broom and gorse that has thrived here over the years. Its rapid growth tends to hide the undulations surrounding the fairways and can obscure the magnificent views over the Moray Firth, which is one of our strong selling points for visiting golfers. Some areas of the course are receiving their first cut in three years and it makes short work of a job that was previously done by a team with brushcutters. The combination of the 8-wheel tractor unit and Tough Cut deck feels really safe, especially when I’ve been using it on 30-degree slopes.

“We’ll be using the Contour deck as a replacement for our old John Deere rotary mower and this will maintain the semi-rough at around 38mm, with the option of raising the height of cut to 100mm, should it be necessary.

“The Power Rake attachment is going to save us time and money when it comes to maintaining the pathways around the course. These were constructed from basic hardcore and Type 1 aggregate when the course was built and do suffer from potholes caused by our machinery and the buggy fleet. I would usually send out three guys to fix potholes, but with this implement that will be reduced to just one.

“I’m now looking at a demonstration of the triple cylinder mowing unit to see if that will suit our future needs. There aren’t any other machines that can swap between rotary and cylinder units plus attach other implements such as trenchers, blowers and even stump grinders. This just demonstrates how versatile the Ventrac is!”Designed by Gil Hanse and Mark Parsinen, Castle Stuart’s championship golf links opened in 2009 and features 18 holes with stunning views across the water to the Black Isle including Kessock bridge and Chanonry lighthouse. It has hosted the Scottish Open on four occasions and won numerous awards including the GEO Certified® ecolabel, an international accolade that recognises its high standards of performance in nature conservation, water and energy efficiency, ethical and environmental supply chain, pollution control and community engagement.