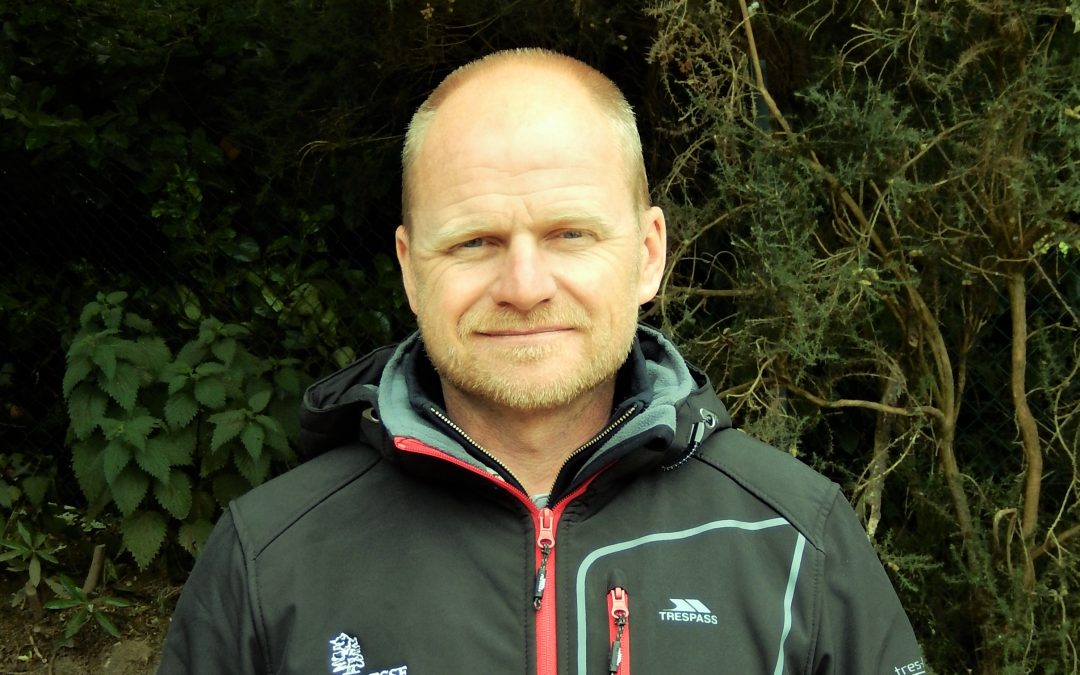 ‘Gamechanger’ Ventrac Still Performing Above Expectations At The Wildernesse

Back in the spring of 2020, The Wildernesse Golf Club, located in the village of Seal near Sevenoaks in Kent, purchased a Ventrac 4500 compact tractor and selection of attachments to assist in the maintenance of its magnificent wooded 18-hole course.

At the time, Course Manager Mark Todd described his new acquisition as a ‘gamechanger’. Ten months on does he still feel the same way?

“Yes, without a doubt,” he said. “It’s continued to work brilliantly for us. It has around 250-300 hours on it; more perhaps than we anticipated. During this latest lockdown we’ve adjusted our working hours and split into two teams of four; one headed by Lee Austin, my deputy, and the other by myself. The team, as always, have stepped up to the mark and continued with the winter projects in sometimes quite challenging conditions, and both the club and myself are very grateful for their efforts.

“Without any golfers on the course we can get on with a lot of winter maintenance and, again, the is where the Ventrac comes into its own. We can get out whatever the weather because its brilliant in the wet and hardly leaves a mark on the course. The Tough Cut deck has lived up to its name when clearing woodland margins, while the Turbo blower has been a godsend.

“Previously we spent far too many hours using backpack blowers removing leaves and other debris from tees, approaches and surrounds, not just in the autumn, but all year round. Having the Turbine blower has enabled one guy to do the job that four guys did previously in a similar time, saving many man-hours. In addition to leaf clearance, it has also been put to good use removing debris after scarifying tees and even blowing cores from the greens after aeration.

“During the autumn, the Contour mowing deck excelled, allowing us to keep mowing during a period of really heavy use. I’m sure that after this lockdown is over; there’s going to be a huge pent-up demand for golf and the Club is looking very closely at ways to ensure that the Members have largely unfettered access to the course.

“Initially I thought buying the Ventrac would be just about maintaining the banks and removing leaves, but we’re finding more and more uses for it. We’ve had absolutely no issues and I’ve been pleasantly surprised. It’s definitely a hard-working piece of kit.” 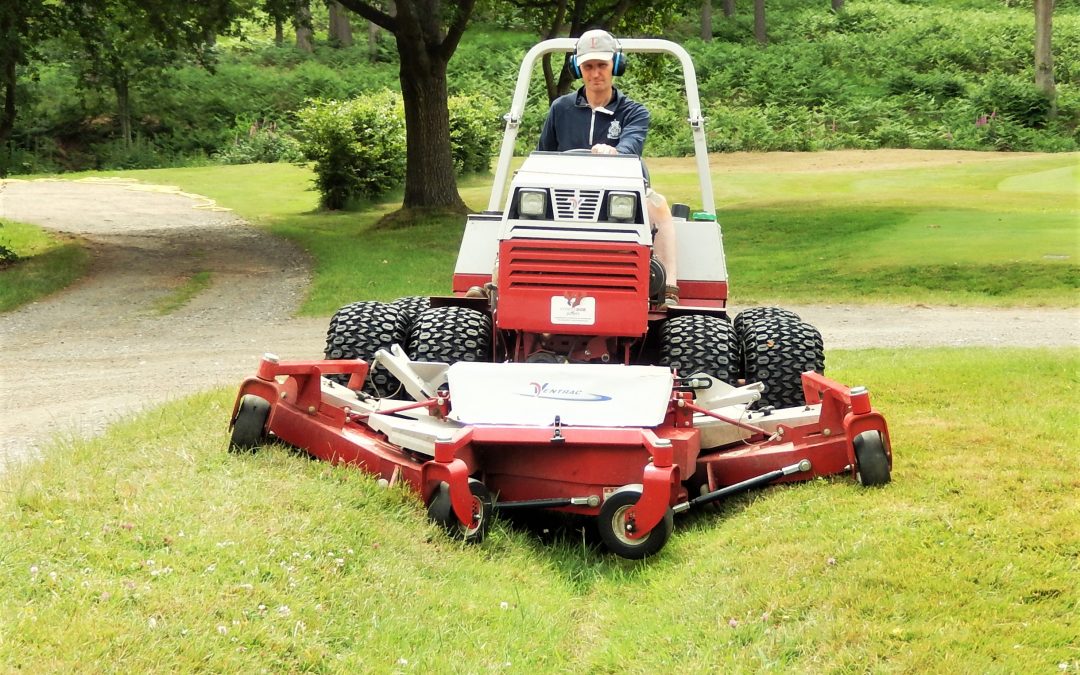 Situated within Ashdown Forest in East Sussex, the club has two 18-hole courses, both over 100 years old and they are proud that no earth was moved, no ponds dug or streams diverted during their construction. They are entirely natural and rely on the uncontrived hazards of heather, narrow fairways, hollows and water to test the skill of the golfer.

Dominic Lewis has been in post for just over a year, having held similar positions at Hadley Wood, Harewood Downs, Oakland Park and Datchet golf clubs. Commenting on the Ventrac he said,

“I’ve been in my position since May last year and quickly discovered the huge amount of time the team were spending on strimming work, on the banks and in the ditches.  It was amazing the amount of time it took; it was a nightmare and, of course, it’s physical and extremely uncomfortable in hot weather. We looked for a solution and discovered the Ventrac. Our local dealer, Ernest Doe, sourced a machine, we had a demonstration and it was obvious it was what we needed. We chose four attachments; the Contour deck, Tough Cut deck, Trencher and Power Rake, so we have virtually four dedicated machines in one. At around £55K for the package, I would say it’s certainly value for money.”

Dave Wakeley, Deputy Course Manager, is the principal operator of the machine and is more impressed with it every time he takes it out.

“It’s a gamechanger for us and is saving us hours on some of the really time-intensive jobs around the courses. For instance, we have to strim the banks and ditches every three weeks and it used to take five of us up to three days to complete. With the Ventrac we have reduced strimming hours by at least 75%, maybe more.

“Following the very wet winter we took the opportunity to add some drainage bands to some particularly difficult areas on site. The Trencher attachment was great for this, very quick and it left a tidy finish, once we’d laid the pipes and inserted the gravel.

“It’s superb on banks and goes where no other machine can go. It takes a little time to get used to, to gain the confidence to go into steep areas, but you soon get to know where it can go. We have used all four attachments; the Power Rake has proved very useful in reinstating the cart paths and machinery tracks, agitating the compacted material, removing ruts and smoothing out the surface. I used it in both wet and dry conditions and would recommend doing this job when it’s wet!”

Dave Mitchell is the club’s long-serving mechanic, having been in the industry for over 45 years, and for the last 30 at Ashdown Forest. He knows a good machine when he sees one.

“This is a very good and well-built machine,” he said. “It’s made from heavy duty steel; the welding is good and it’s robust. The attachments are belt-driven and easy to maintain, there are a couple of grease nipples that are difficult to access, but that’s being very picky! The lift-up decks are a great feature, so there’s no excuse for not cleaning the machine after use. All-in-all, a good addition to our fleet.”

Maintaining ditches now only requires the bottom area to be strimmed.

Deputy Course Manager Dave Wakeley says, the Ventrac goes where no others can! 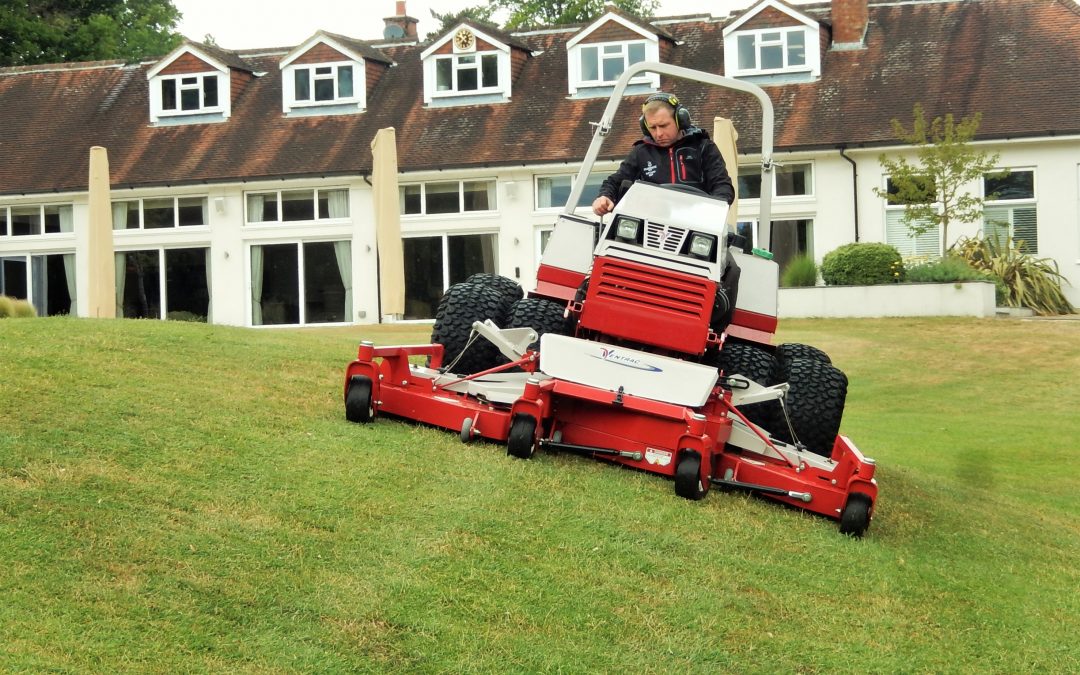 ‘Gamechanger’ Ventrac At The Wildernesse

The Wildernesse Golf Club has purchased a Ventrac 4500 compact tractor and selection of attachments to assist in the maintenance of the magnificent wooded 18-hole course, located in the village of Seal near Sevenoaks in Kent.

Mark Todd is the Course Manager and heads a team of eight including a full-time mechanic. He began his career in 1988 at nearby Lingfield Park Golf Club, where he spent 10 years learning his trade before joining The Club Company at Nizels Golf and Country Club as Deputy Course Manager. Within six months he was promoted to Course Manager and in 2007 took up his current position at The Wildernesse.

“It might be a cliché, but this incongruous looking machine is a gamechanger,” he said. “We purchased the tractor unit and three attachments; the Contour deck, Tough Cut deck and Turbine Blower. We are a heavily wooded course and we spend too many hours using backpack blowers removing leaves and other debris, not just in the autumn, but all year round. We hand cut all our greens and the team take a backpack blower with them every time, to clear the surface before mowing. This is so time-intensive, but the Turbine blower is brilliant; we also use it to remove the debris after scarifying tees and even blow cores from the greens after aeration.

“The Tough Cut deck is great for maintaining the woodland margins. We used to use a compact tractor and flail to mow these areas, but it was a heavy and cumbersome combination. The out-front position of the Tough Cut deck combined with the low profile and agility of the tractor unit, means we can get in and under the trees. Without doubt, it has lifted the presentation of the course.

“Changing between the different attachments is quick and easy. There’s no three-point linkage to worry about or adjustments to make, you simply drive out of the current implement and drive into the next one. The mounting system is ingenious; it’s so quick that it encourages you to use it to its full potential. We recently loaned the stump grinder attachment and I was extremely sceptical that a belt-driven implement on a sub-25 hp tractor would be robust enough to do the job. However, it was outstanding and seemed defy the laws of mechanics; it will certainly be our next purchase.

“Initially I thought buying the Ventrac would be just about maintaining the banks and removing leaves, but we’re finding more and more uses for it. When we were looking to purchase the equipment, I had great support from the club. I made what I hoped was a sound business case and also invited the Greens Chairman to the demonstration. Everyone was impressed with its slope climbing ability and its potential labour-saving attributes, which have since become a reality. You know you’re on a winner, when there’s a lot of interest and positive comments from the members! “I’ve been very fortunate during my time here as the club has been very supportive. They have invested in a new irrigation system, new machinery and throughout the Covid-19 pandemic have been superb. We had numerous meetings and discussions on how we would approach and handle the situation and I must say, that my greenkeeping team have gone above and beyond expectations.

“We split into two teams; one headed by Lee Austin, my deputy, and the other by myself. We worked 10-hour days, one on, one off and it worked very well. We’ve followed the rules on social distancing, we’ve done a lot more cleaning and sanitising and the lads have been really flexible.

“The course was in very good condition when we reopened. We normally have a two-tee start, but that’s now down to a single tee and two-ball groups only, although this will be relaxed shortly. We’ve been booked solid and have a starter on the tee all day. Golfers must arrive 10 minutes prior to the allocated tee time and change in the car park. The only facility that’s open is the toilets.

“There was a lot of talk about golf being allowed back earlier than it was, but I think it would have been seen as elitist if this happened. Now that it is back it might help encourage more participants, as it is one of few sports that can adapt in these strange times. Only time will tell.”