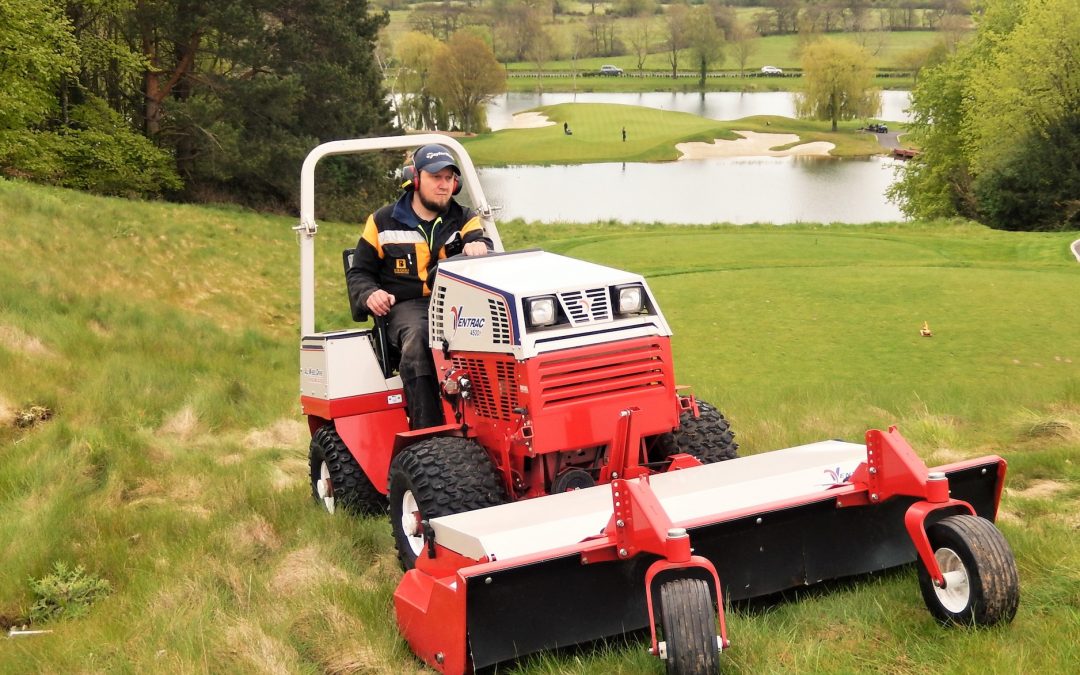 JCB Golf & Country Club, the flagship sales and marketing tool of the JCB brand, situated in rolling parkland adjacent to the company’s World Headquarters in Staffordshire, has purchased a package of Ventrac equipment from local dealer, Sharrocks. Included in the package is a Ventrac 4500 all-terrain compact tractor with dual-wheels, a Tough Cut rotary deck, a Power Broom and a Stump Grinder.

The 7,400-yard course, which opened in 2018, was designed by architect Robin Hiseman of European Golf Design, and is situated in 280 acres on the estate of the former Woodseat Hall and surrounding farmland. It can be played by JCB management, staff and their guests, together with private and corporate members including dealers, suppliers and major customers. Integral to the design brief is the expectation that it will become a regular venue for a professional tour golf.

Callum Wark is the Course Manager and is responsible for a team of 31 full-time staff including three apprentices, two irrigation technicians, two mechanics and four gardeners. He’s been at the course since its inception having been employed here since the start of the course build back in 2016.

“It’s the best decision I’ve made in my career, so far,” he said. “I previously worked at Loch Lomond and it was great grounding, but when I was offered the opportunity to work on a new build, something very rare these days, especially so in the UK, I jumped at the chance. I worked as Head Greenkeeper under Euan Grant and when he left, I applied for the job of Course Manager and was successful.

“We have large estate to manage here and the CEO demands that it is of the highest quality possible. Not just the golf course, but all the areas surrounding the clubhouse, our luxury lodges and the academy. JCB is renowned across the globe and our facilities here must reflect the esteem intrinsic in the brand. That’s our goal and, in a nutshell, that’s my job.

“Therefore, we need robust and reliable equipment, to ensure that we maintain the property to these exacting standards. And, that’s why we’ve purchased the Ventrac package. This course has been designed to accommodate championship golf and has been constructed with dramatic fescue mounds and banking for spectator viewing. We needed a machine that could tackle these slopes; we tried other machines, but none came close to what the Ventrac could do. The initial demonstration was excellent and we knew very quickly that it was the machine for us.

“We have 10 km of tarmac-ed cart paths and these need to be swept clean on a regular basis. We also have extensive car-parking and other hard landscaped surfaces, so the inclusion of the Power Brush in the package was an obvious choice. We have numerous tees on each hole, but the championship tees are rarely used and this can lead to a moss issue. This can be controlled by setting the broom bristles to just touch the sward and removal is quick and simple. Being a woodland estate, the Tough Cut deck and Stump Grinder come into their own when we clear any woodland margins. “Versatility is the key word when describing the Ventrac; one power unit for many accessories. I need to make a business case for the additional purchase of the Cart Path Edger. The cart paths are all edged with kerbs and a strip of fine fescue either side. I usually send four guys out to edge those areas, whereas one guy on a Ventrac could do that in just one day.”

Tim McCutcheon is the Head Mechanic and has been described as a green-keeper with a passion for mechanics. He began his career at Lichfield Golf Club, before enrolling on the Ohio State Program, where he spent 18 months working at Southern Hills Country Club in Tulsa, OK, recognised as one of the top 100 courses in the world and host to 15 Championships since 1945. “What can I say about this machine apart from it’s brilliant,” he said. “From a greenkeeping perspective it’s so versatile, but from a mechanic’s point of view, it’s a dream. It’s robustly built, the belts are easily accessible and simple to change, as is the access to filters and grease points. The flip-up decks make cleaning and maintenance easy and the accessory mounting system is ingenious. One thing is outstanding, especially in my role, and that’s the quality of the manuals. They are extensive and in colour, which really helps when trying to identify parts. All-in-all, a great addition to our fleet.”