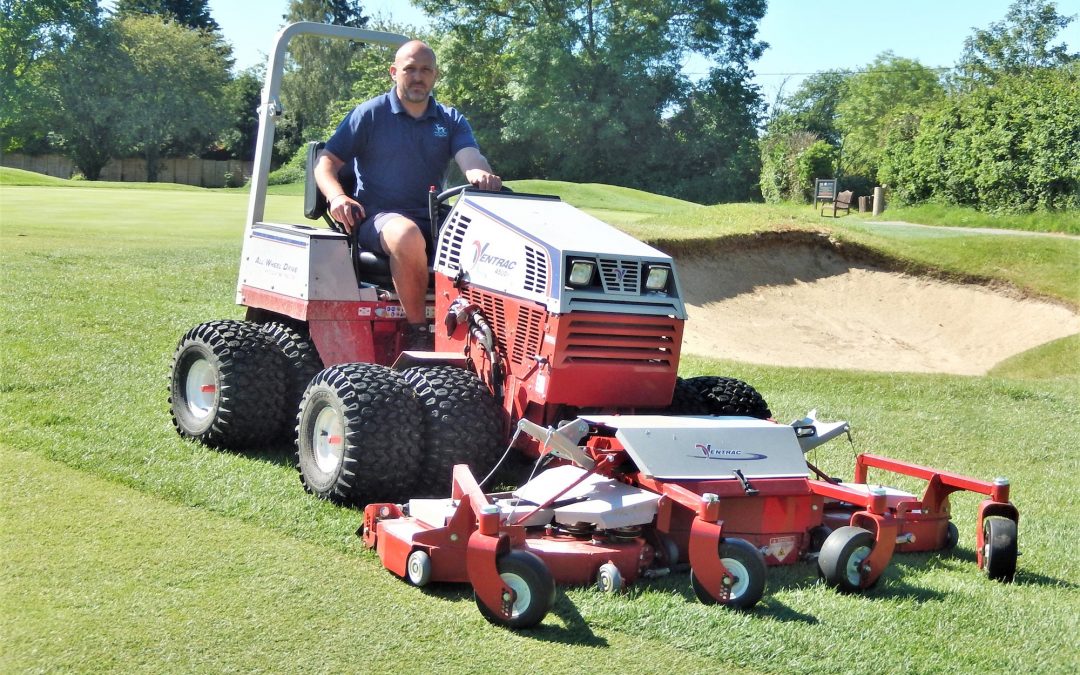 Newbury & Crookham Golf Club have purchased a Ventrac 4500 all-terrain compact tractor and two mowing decks, which course manager Chris Ball says will make the greenkeeping department at the 148-year-old club even more efficient. Purchased from local dealer, T H White, the package included a Contour mowing deck and a Tough Cut deck, which will enable the greenkeeping team to work smarter and safely when maintaining the woodland margins and steep banks on 6,000-yard course.

“My team have done an exceptional job during the pandemic crisis and it is only right that we should ensure they work in complete safety, not just in these exceptional circumstances, but at all times. These two decks in conjunction with the eight-wheel tractor unit guarantee that when working on tee banks or around the reservoir, they can do so in complete safety. As a small team of just six, it’s important that we work smarter; now we can cut areas mechanically using just one person, where we previously used numerous team members with brushcutters, saving many greenkeeping hours that can now be utilised elsewhere on the course.”

“The Tough Cut deck will help us both ecologically and aesthetically, keeping the woodland floor open and encouraging more spring bulbs to flourish. We want to see carpets of bluebells in subsequent years. Also, with the Contour deck we’ll be able to maintain steeper areas on the course making the presentation even more appealing for members and visitors. We’ve only had the equipment since mid-May, but already it has proved its worth; it’s a simple, clever design, does the job and is easy to maintain.”

Chris Ball joined Woking Golf Club as an apprentice in 1994 and knew immediately that this was to be his chosen career. In 1998 he moved on to Guildford Golf Club and four years later joined Walton Heath, working under two renowned industry figures in Clive Osgood and Ian McMillan. In 2002 he joined Bearwood Lakes, where he was appointed head greenkeeper, reporting to the course manager. He has been course manager at Newbury and Crookham since 2014.

Newbury & Crookham is one of the oldest clubs in England, established in 1873. The 18-hole, par 69 golf course measures just under 6000 yards and is set amongst beautiful mature woodland. Situated on the south side of Newbury, between Greenham Common and the racecourse, the current course dates back to 1923, when the Newbury and District Club was founded. Crookham Golf Club was founded in 1873 on Greenham Common, but after it was requisitioned in 1940 by the MOD, the members were given temporary membership by their neighbours, which eventually became permanent and the club adopting its current name.