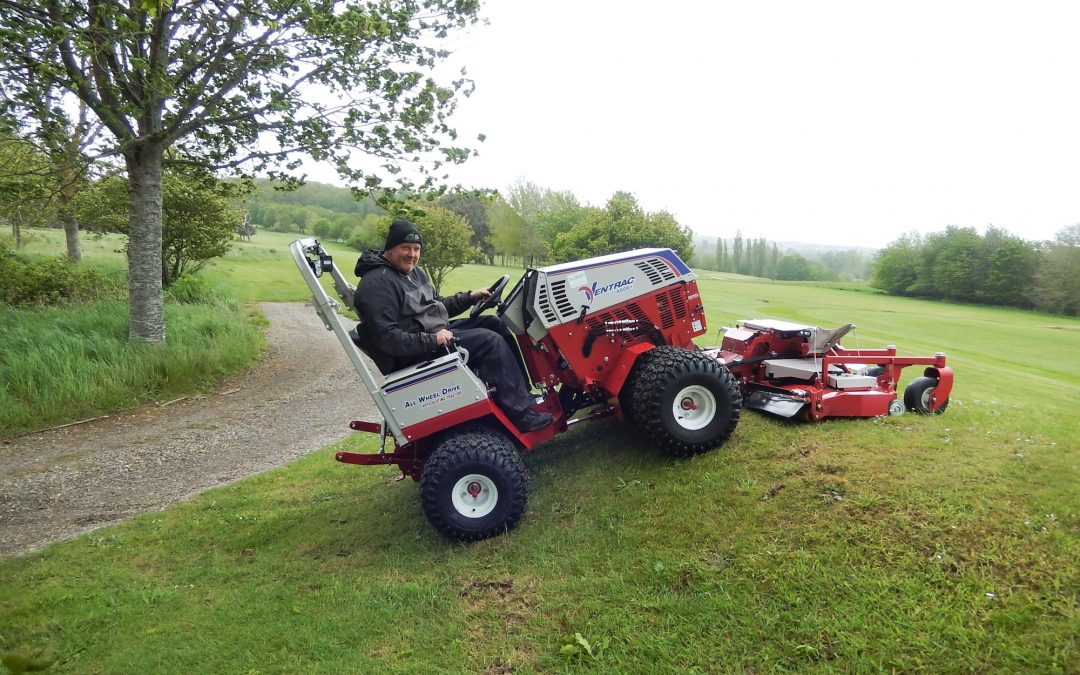 Commenting at the recent handover of the equipment Warren Moss said,

“We have an ageing fleet and we need to be smarter in how we purchase equipment in the future. The owners were very supportive when I made the business case and we are replacing two machines with one. Because of its versatility, we can add more attachments at a fraction of the cost of purchasing new dedicated equipment, so we should be able to upgrade more cost effectively, when we need to.

“I’d seen the media reports and watched some YouTube videos and even arranged a demo a couple of years ago. We had another demo recently, this time with the Contour deck and it performed extremely well. We use it on tee banks, green surrounds, bunker surrounds and can raise the height of cut to manage the semi-rough. Also, as it has a three-point linkage at the rear, we can mount our Sisis Twin Play with sorrel roller and slitter.

“My main reason for specifying this machine is its slope climbing ability. It’s extremely stable on slopes of up to 30 degrees, making it safe and manoeuvrable, especially on tees. About a third of the course is on a flood plain, so can be quite wet in winter. Because of its light footprint in its eight-wheel configuration we will be able to get out during wet spells without damaging the playing surfaces. I’m also impressed by the Aera-vator attachment, which makes aeration on banks possible, so this might possibly be our next purchase.”

Set in 160 acres of undulating Dorset countryside just outside of Bournemouth, the Donald Steel-designed 6,904-yard, par 71 championship course features nine lakes and is bordered by the river Stour. It has hosted several prestigious events including the PGA Europro Tour, which featured on Sky Sports and the BMW PGA Order of Merit Championship. Warren Moss, who heads a team of six, has been at the club for the past 12 years, the last six as Head Greenkeeper. He started his career at Yeovil Golf Club, where he attended Cannington College and enjoyed a six-month placement in Germany. He was a member of the newbuild/grow-in team at Orchardleigh near Bath in the mid-1990s, where he stayed for 15 years until joining Dudsbury.