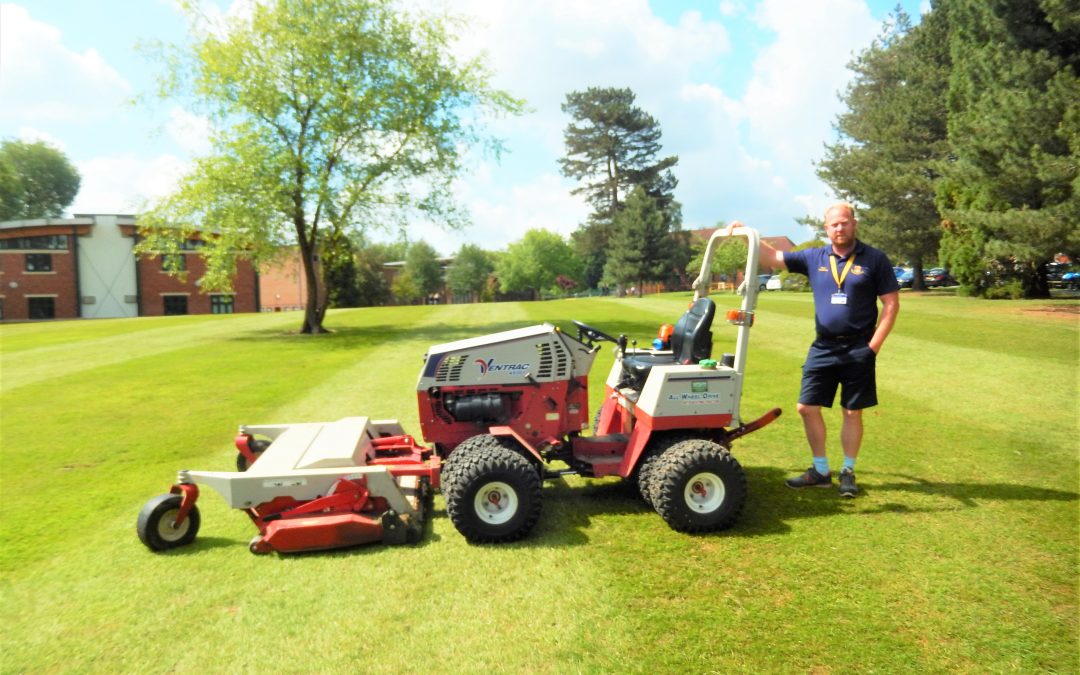 Adam Smith, the Head of Grounds and Gardens at Bishop’s Stortford College, has been delighted with the higher level of presentation and the work-hour savings, following the purchase of a Ventrac 4500 all-terrain compact tractor. Supplied through local groundscare dealer, Upsons Mowers, the package initially included a 72-inch rotary mowing deck. Subsequently the College has added a Power Brush attachment.

Adam’s career in the industry has included numerous different roles – first as a mechanical technician with a European groundscare contractor, then as a product demonstrator followed by a sales role with a large regional UK dealer, and a further sales role for Toro in Brisbane. On returning to the UK, he gained more sales experience with a John Deere dealer before a career switch to groundsmanship at nearby Haileybury Imperial College, before joining the Bishop’s Stortford team two years ago.

“Without a doubt the Ventrac has enhanced the overall appearance of our large grassed areas and its ability to mow on 40-degree slopes has cut out hundreds of hours of brush-cutting for the team” he said. “There are only four of us, so every hour is vital. Strimming is such a time-consuming job, but we have now freed up hours that can spent on other important tasks around the facility. It has been a gamechanger.”

“We have some serious banks across the 130 acres and I was looking for a machine that would save us from the hours of brush-cutting. Upsons suggested the Ventrac and, at first, I wasn’t too sure; to be honest it looked a bit ‘Mickey Mouse’, but once we’d had it demo-ed we were immediately won over. Andy Richards came over from Haileybury for the demo and he has bought one as well. We have a good working relationship and, on occasions, lend each other attachments. It’s simple with the Ventrac linkage system, there’s no complicated set up, you just drive out of one and drive in to the next.

“Before the Ventrac we were using a 50hp tractor with a rear-mounted roller mower, but it was so cumbersome with limited maneuverability in tight spaces. We have several outdoor teaching spaces, such as the arboretum, and getting around the trees and outdoor furniture was a major problem. The Ventrac alleviated this immediately as it has a centre-pivot steering system and can turn tightly. Again, this saves many workhours and is much more efficient.

“This has become our front-line machine; its low ground pressure means we can go out at any time, even in some of the very wet areas and you feel really safe on the banks, it’s a machine you can trust. We have a natural spring that rises near our Pre-Prep School and we can’t usually get in there before late May, but with the Ventrac we cut it in February.

“The weight transfer system works well and by turning it down, the striping effect when using the roller deck is excellent. I particularly like the rear three-point linkage. We can hitch up our Sisis brush units and use the Ventrac as the tow vehicle on our synthetic surfaces. It has such a light footprint, much better than a utility vehicle and we can also brush in stripes on our natural surfaces, if required. We also have a ball hitch, so we can attach equipment such as our water bowser or trailers. Its versatility is endless.”